Priests and laymen interested in
the liturgy of the Roman Catholic Church,
according to the Constitution Sacrosanctum Concilium
of the Second Œcumenic Council of Vatican (December 4th, 1963).

Email: (In case of trouble due to spam-fighting, you can try to use the following email: ). 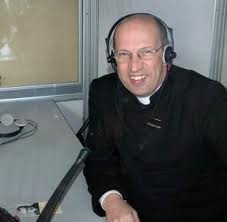 Father Pierre FRANÇOIS, Ph.D., was born on May 11th, 1957, in Hasselt (Belgium) and is a priest of the Clergy of the Prelature of the Holy Cross and Opus Dei.

With a degree of Engineer in Applied Mathematics at the University of Louvain-la-Neuve (Belgium), he worked as an Engineer in Computer Sciences, mainly in Rome (Italy) and at the Queen Mary College of London (United Kingdom), till his ordination as a priest by John Paul II on June 12th, 1983.

He has been working since 1985 as a Chaplain of students in Louvain (Belgium) and Amsterdam (The Netherlands) and attending several groups of professionals in Antwerp (Belgium) and other cities.

After a Doctorate in S. Theology at the University of Navarre (Spain) on Christology, he specialized in Liturgy, that he is teaching to several kinds of audiences. As a part of his pastoral activities for the Opus Dei, he organizes liturgical celebrations as a Master of Ceremonies.

He is a founding member and the current Chairman of the
Vlaamse Werkgroep voor Hedendaagse Latijnse Liturgie
(VWHLL),
the Flemish Workgroup for Contemporary Latin Liturgy.

He has also been appointed by the Episcopal Conference of Belgium as National Spiritual Adviser for the Guides and Scouts of Europe of Belgium from February 2012 until February 2019, when the Holy See confirmed him as the Federal Religious Adviser of the International Union of Guides and Scouts of Europe. The bishop of Antwerp assigned him as parochial vicar in the collegiate church of St. James, on November 1st, 2014.

He is also involved in catechetical education on
Radio Maria Vlaanderen.

Jean PFLIEGER is Lector and Acolyte. The picture hereby is from 1983 and shows that the people at www.romanliturgy.org obviously like the Roman liturgy and are attached to the Holy Father.

The text of the Latin readings of the Lectionary posted on this website are entered by Jean. If you find typos, please contact him at: .